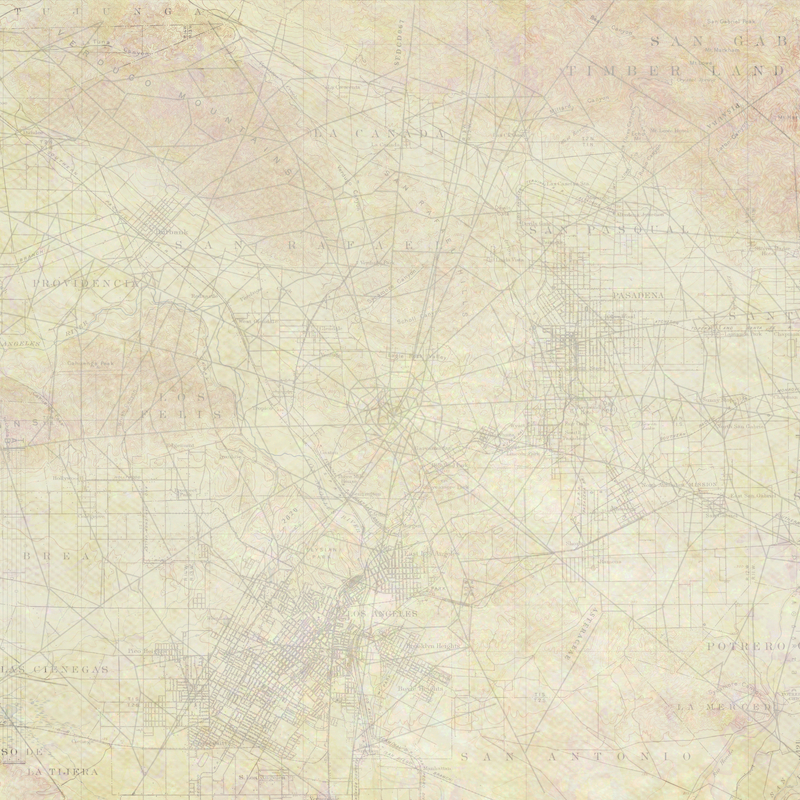 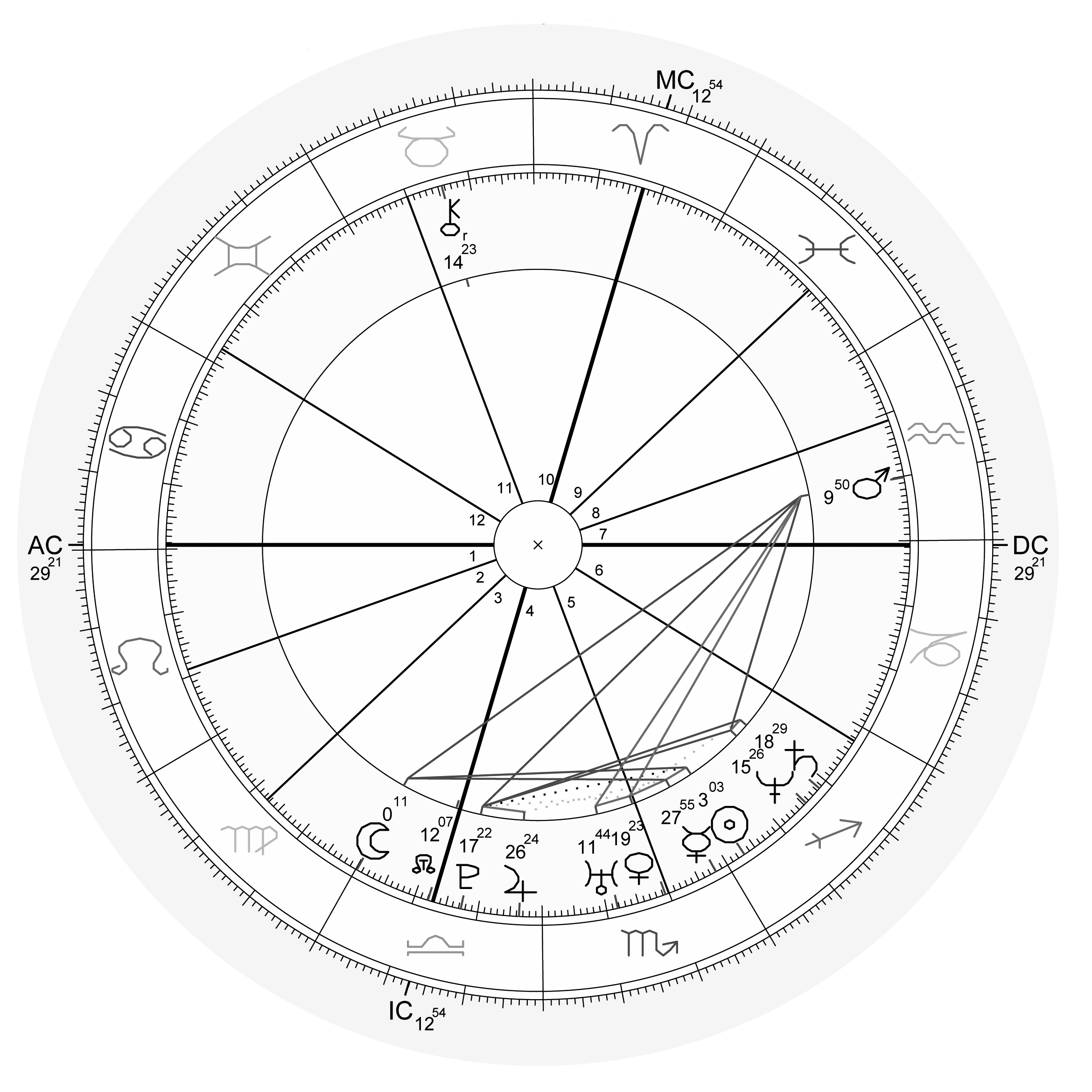 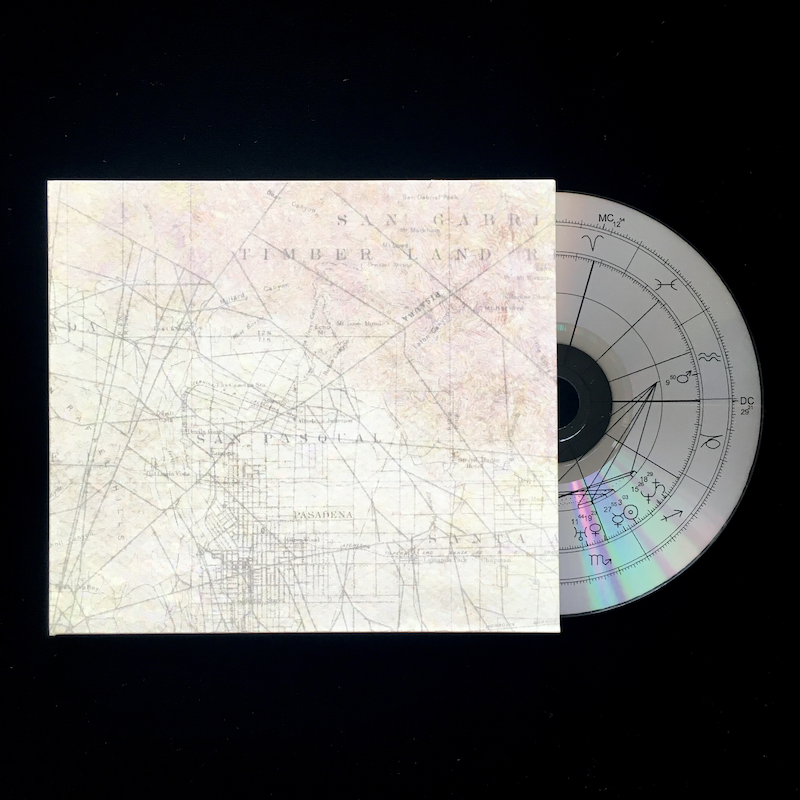 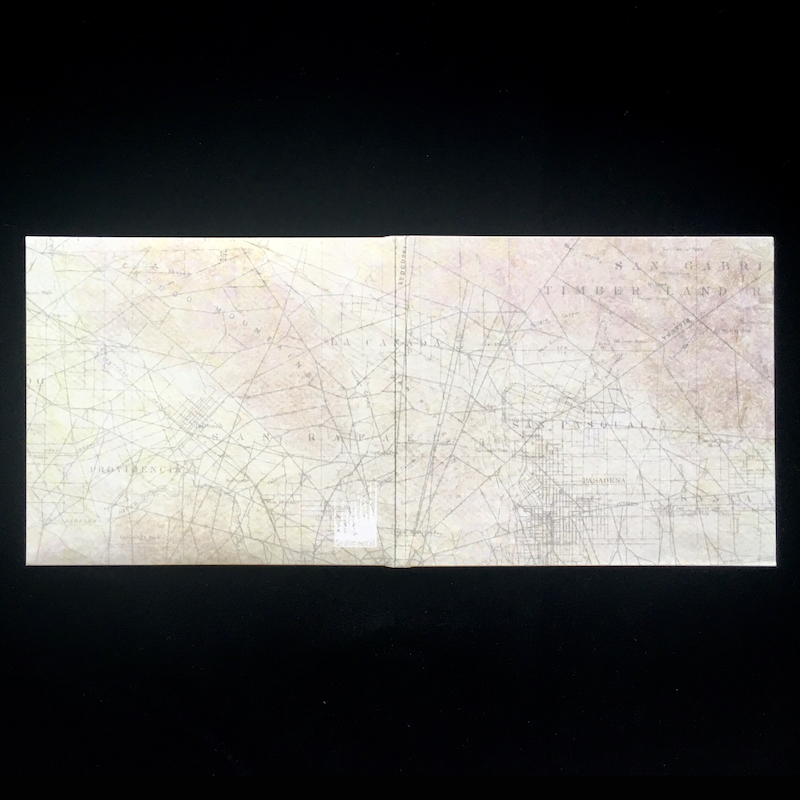 Pisaura is Zizia (Amber Wolfe Rounds and Jarrod Fowler) and Michael Pisaro-Liu. Pisaura is a palearctic genus of araneomorph nursery web spiders (Pisauridae) named after the Pisaurus (Foglia) River or Pesaro region of Italy. Asteraceae (Compositae) is a cosmopolitan family of dicotyledonous flowering plants named after the Classical Latin word aster, "star". Asteraceae is a composition that layers celestial maps over terrestrial maps for indeterminacy.

Pisaura layered a celestial map of our multi-composite astrological chart over a terrestrial map of greater Los Angeles. The celestial map was sized to the terrestrial map such that the location of Saturn corresponded to the Mount Wilson Observatory and Chiron corresponded to the California Institute of the Arts. The remaining planets - Ascendant, Sun, Moon, Mercury, Venus, Mars, Jupiter, Uranus, Neptune, and Pluto - were thus webbed throughout greater Los Angeles as determined by the celestial-terrestrial positions of Chiron and Saturn.

Pisaura gave site-specific performances, made field recordings, and took collections of natural objects at each planetary location from December 2018 to February 2019. Planetary rulership determined the day of the week or time of the month that Pisaura visited each site. For example, the Sun location would be visited either on a Sunday or when the Moon was located in Leo, the sign ruled by the Sun. Our multi-composite chart therefore provided a structure for us to create music in harmony with celestial rhythms.

Celestial rhythms appeared as terrestrial synchronicity at many planetary locations. Intentionally, Saturn-Sagittarius and Chiron-Taurus sites were selected for symbolic associations with composition and education, respectively. Synchronically, our Sun-Sagittarius site presented a colony of feral honey bees (Apis mellifera L.), which symbolize the Sun and warmth; our Ascendant-Cancer site presented waterfalls, appropriate for the cardinal water sign; while Pluto-Libra, a planet associated with both life and death, presented a graveyard.

Track contents were based on both site-specific materials and planet-sign-element-modality specific archetypes. For example, the Ascendant of our multi-composite chart was the water sign of Cancer; thus sine tones with frequencies corresponding to tidal locking rhythms, tape loops of black locust pod percussion, hydrophone recordings of carbonated water and aquarium exhibits... were incorporated into track 23. All recordings were replicated and tuned as triads in accordance with an esoteric tone spiral. Therefore, all recorded sounds simultaneously occur as sign-specific composites throughout Asteraceae.

Our multi-composite chart presented patterns from which Pisaura created melodies (Figure 1). The 360-degree chart structure was translated as a 36-beat structure comprised of three measures of 12/8 time (Figure 2). The planets and signs were thereby located within the 36-beat structure as a unique melodic pattern. Instruments were tuned based on esoteric musical systems according to Venus, which was the planetary ruler of our Moon sign, Libra. Specific musical notes that span five octaves were selected according to the tone spiral.

The astrological chart also offered patterns that determined the durations of our tracks. Track durations were correlated with our 360-degree multi-composite chart, such that one 10-degree chart segment equalled one minute (1-degree equals six seconds). For example, there was a 60-degree counterclockwise distance from our Ascendant to the appearance of our first planet, the Moon at 0° Libra in the 3rd house. Thus, the duration of track 02 was 6:00. Moreover, the overall degree-duration pattern was doubled and "eclipsed" across our entire 24-track sequence.

Patterns derived from layering a celestial map over a terrestrial map provided productive methods of indeterminacy. Celestial and terrestrial rhythms were connected through the use of astrology as a chance operation across a landscape scale. Asteraceae could be performed in other locations by various individuals or groups to explore unique musical results based on celestial rhythms from astrological charts.